Playwright Jennifer Blackmer to join us for a talk-back on Jan. 18th 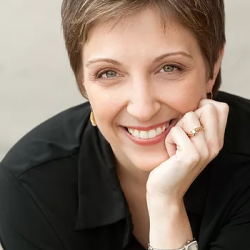 Join us for the January 18th production of Margaret Atwood's Alias Grace, and then stick around for a talk-back with playwright Jennifer Blackmer.

The talk-back is free and open to the public.

Jennifer Blackmer is the 2015 PEN/Laura Pels International Foundation for Theatre Award winner for Emerging American Playwright, and serves as Professor of Theatre and Executive Director of the Virginia B. Ball Center for Creative Inquiry at Ball State University.

Her plays have been produced off-Broadway and across the country, and include Human Terrain, Unraveled, Margaret Atwood’s Alias Grace (Joseph Jefferson award for Best Adaptation), Delicate Particle Logic, Borrowed Babies, and the upcoming Predictor, currently in development. Jennifer’s screenplay for Human Terrain won the prestigious Alfred P. Sloan Foundation award through the Tribeca Film Institute, and was also a finalist for the Sundance Film Institute Sloan Prize.

Additional film and television work include the feature Rare Earth, series Miss Mitchell’s Comet, and a rewrite of the Aaron Berg feature Assault. Jennifer’s writing has been short-listed for the Princess Grace Award and the Shakespeare’s Sister Fellowship, and has been developed by Seven Devils, Illinois Shakespeare Festival, Nashville Repertory Theatre, The Playwrights’ Center, The Lark and Activate Midwest.

Jennifer is a resident playwright for Chicago's Broken Nose Theatre.