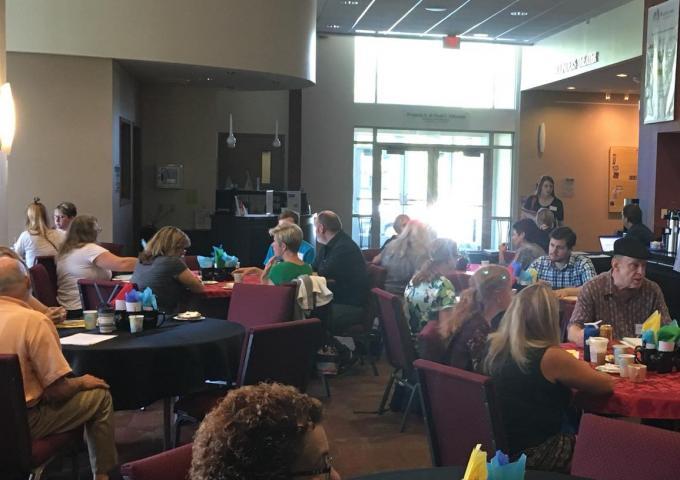 Don't miss this year's live and in-person Theatre Education Conference at Weathervane Playhouse! This conference is meant to provide a networking and educational venue for Northeast Ohio theatre educators and professionals of all skill levels and abilities. If you’ve been a part fo creating or producing theatrical productions for years or if you’re just starting out, you will learn valuable skills while making amazing connections at this event! Speakers include professionals from Weathervane Playhouse, Rebel Panda Productions, and other theatre educators from the surrounding community.

The day will include coffee and lunch, networking, and sharing sessions. Registration is $40 for college students, $60 for teachers, and an optional CEU for an additional $25.

Topics covered will include:

Tari is a member of the Guild’s Education, Awards, DEI, and Copyright Advocacy committees.  She also helps produce the Dramatists Guild’s regional and national conferences, their annual Awards Night, and other special events such as the Anti-Piracy Blast to stop sheet music online piracy, and Copyright Matters, a program presented at the Library of Congress. Tari is an instructor with the DGI and has also represented the Guild at various conferences around the country, including KC/ACTF, BroadwayCon, the Austin Film Festival, the Edinburgh Festival Fringe, and the Association for Writers and Writing Programs. Tari is proud to serve on committees with the Guild, the League of Broadway Theaters and Producers, and the Alliance for Inclusion in the Arts to increase diversity in the performing arts and has assisted in episode planning of the Dramatists Guild’s podcast TalkBack.

Before joining the Guild, Tari worked as an actress and/or theater administrator at theaters across the country, including organizations in Ohio; Detroit, MI; Woodstock, NY: NYC, and Cedar City, Utah.  She was an adjunct professor at Fordham University in New York City.  Other teaching includes courses in theater history, acting, and scene study.  She has a BFA in acting /directing from Kent State University and an MFA in theater management from Wayne State University.

The Dramatists Guild of America is the national, professional membership trade association of theatre writers including playwrights, composers, lyricists, and librettists.  The Guild was established for the purpose of aiding dramatists in protecting both the artistic and economic integrity of their work.  The Dramatists Guild Institute offers hands-on, rigorous training for writers at all skill levels, providing students with an engaging and empowering educational experience.

Lauren is a graduate of The University of Akron where she received her B.A. in Dance with a business cognate, and MA in Arts Administration. She has been teaching arts classes for almost 12 years, and worked as an administrator supervising educational outreach programs, creating curricula, establishing an arts ambassador program, developing program assessment surveys, assisting with grant writing, and coordinating performances in a studio setting, in school programs, and with community organizations.

Michael received a Music Education degree from Bowling Green State University and currently teaches for Avon Local Schools as the High School Choir Director. He has performed in roles such as Clopin Trouillefou (The Hunchback of Notre Dame), Cinderella's Prince (Into the Woods), Prince Eric (The Little Mermaid), King Mongkut (The King and I), and Dr. Falke (Der Fledermaus) and been on the directing team for shows such as [Title of Show], Seussical the Musical, The Addams Family, and Beauty and the Beast. Michael is excited to be back working with Weathervane Playhouse, and appreciates all that they do to foster arts education in our community!

Rob Peck owns and operates Rebel Panda Productions, supplying production equipment and design to many professional and community theatres in the Cleveland Area as well as event services to nonprofit organizations. Rob was formerly Technical Director and resident designer at Hathaway Brown School. Designing productions and teaching Technical Theatre. Rob has been an Artist in Residence at Cleveland School of the Arts for12 years. Rob is well versed in all aspects of Artistic and Technical production. He has worked as a Production Manager, Stage Manager, Sound, Lighting and Scenic Designer as well as Technical Director and Properties Master. He has worked for The Cleveland Playhouse, Mamai Theatre, Karamu House, Ensemble Theater Company, Dobama Theatre, Cleveland Public Theatre and Opera Cleveland. Rob has worked regionally in New York, Chicago, Seattle and Dallas. Designing classic plays, experimental works, world premieres, musical theater and Opera.

Mr. Smith joined the professional staff of Weathervane Playhouse in 2008. Weatherane's recent production of Mamma Mia! marked his 100th show at the playhouse. In past seasons, feaured productions include Into the Woods, The Hunchback of Notre Dame, Joseph and the Amazing Technicolor Dreamcoat, Dreamgirls, Children of Eden, Intimate Apparel, Hair, Charley’s Aunt, and Life with Father. Regionally, Jasen has designed The White Devil (AlabamaShakespeare Festival), The Pirates of Penzance, The Mikado, The Merry Widow, and Robin Hood (Ohio Light Opera), The Philadelphia Story, How I Learned to Drive, Much Ado About Nothing, The Glass Menagerie, Tartuffe, The Firebugs, Medea, and Stage Door (Case Western Reserve University), The Odd Couple (Porthouse Theater), A Funny Thing Happened on the Way to the Forum starring Richard Kind for the Stephen Sondheim Center for the Performing Arts.

Mark A. Zimmerman has served as the theatre director at the Akron School for the Arts at Firestone CLC since 1995 and has been the guiding force for the educational theatre program that was named an “Outstanding School” by the Educational Theatre Association (2013). Shows under his direction have so far earned 7 Dazzle Awards from the NE Ohio Musical Theatre Competition (Playhouse Square) including "Best Musical" in 2018. Zimmerman has been among the first area directors to present many musical productions including The Little Mermaid (2016), Ghost the Musical (2015), Mary Poppins (2014), Monty Python’s Spamalot (2013), The Color Purple (2012), Legally Blonde (2012), Hairspray (2011), The Producers (2009), Side Show (2008), and Urinetown (2007). Mark’s local directing credits include productions at the Akron Civic Theatre/ All-City Musical (Mary Poppins, Beauty and the Beast, Shrek, Bye Bye Birdie, Ragtime, Hairspray) as well as productions at the Cleveland Public Theatre, Weathervane Playhouse, Stow Players, the Western Reserve Playhouse, Coach House Theatre, and the University of Akron. He is a member of the governing board of the Ohio Educational Theatre Association where his responsibilities include serving as the NE Ohio Area Representative.